coronavirus July 4 is finally here – everything you can...
coronavirusNews

July 4 has been dubbed the UK’s Independence Day as hairdressers, pubs and cinemas are reopening to the public.

Pubs and restaurant are reopening today[/caption]

Some hairdressers have opened at midnight as pubs had to until 6am to pull their first pints for thirsty boozers.

Businesses have finally reopened in England after being shuttered for three months because of the coronavirus pandemic.

Here is everything you are allowed to do now that lockdown has been eased. 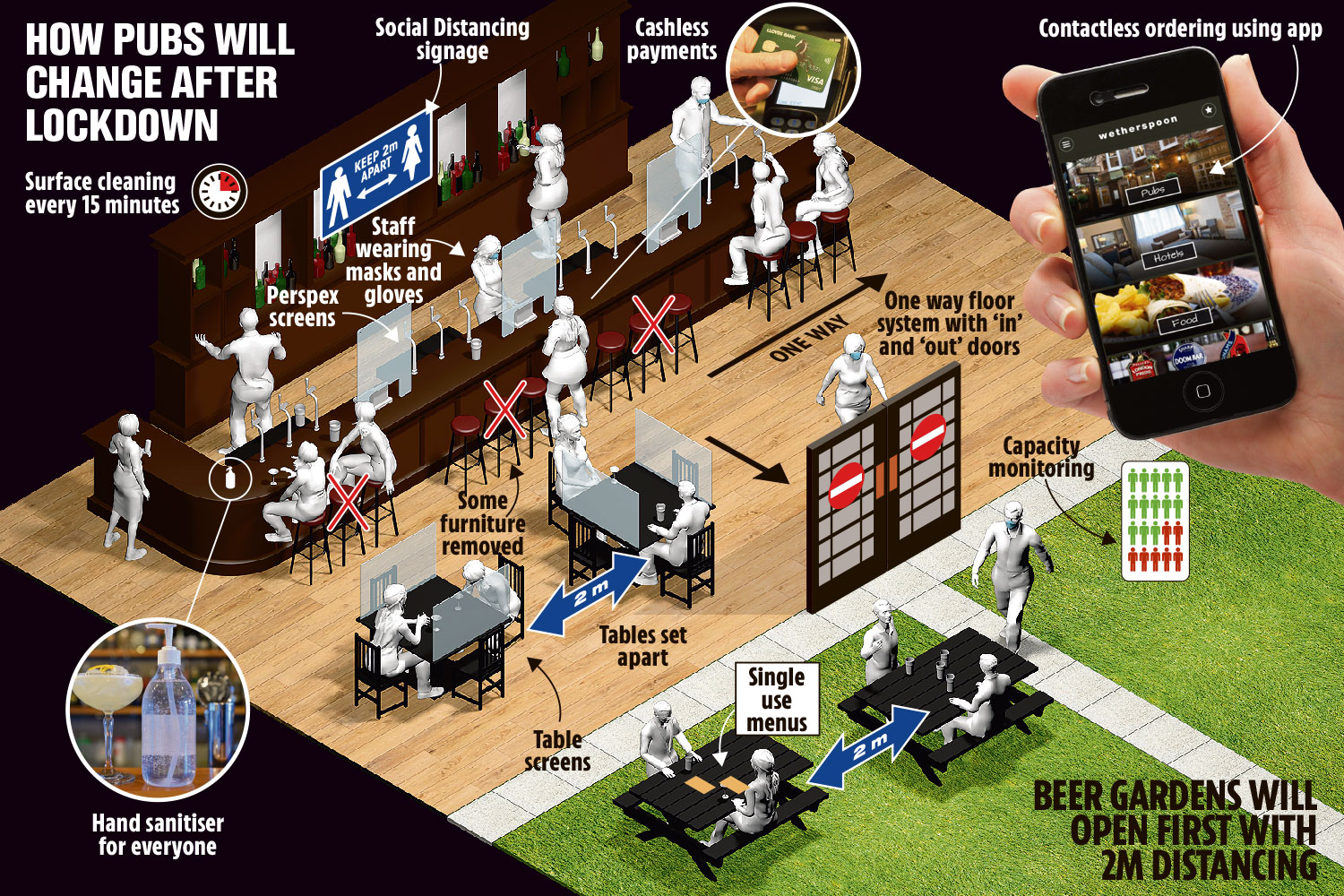 Venues are encouraged to be table-service only, and have guests order drinks and food through an app where possible.

The Sun revealed this week that pubs are allowed to show the football – but it will have to be on quietly.

Loud music is also be banned to stop people having to shout to be heard by their friends.

The guidance warns venues they “should not permit live performances, including drama, comedy and music, to take place in front of a live audience”.

Venues are encouraged to use disposable condiment packets where possible to limit the spread of germs via surfaces.

Cutlery won’t be laid out on tables unless people order food either.

The guidance says businesses should help the NHS Test and Trace system by keeping a registry of patrons’ contact details for at least 21 days in case of an outbreak.

Pubs and restaurants have to reduce the number of people in venues at any one time to allow for social distancing – but also to discourage public transport use.

The new rules ban groups of more than 30 people to form.

Toilets which have been closed throughout the coronavirus crisis are reopening in pubs, restaurants and public places.

But they are subject to strict hygiene restrictions and extra cleaning. 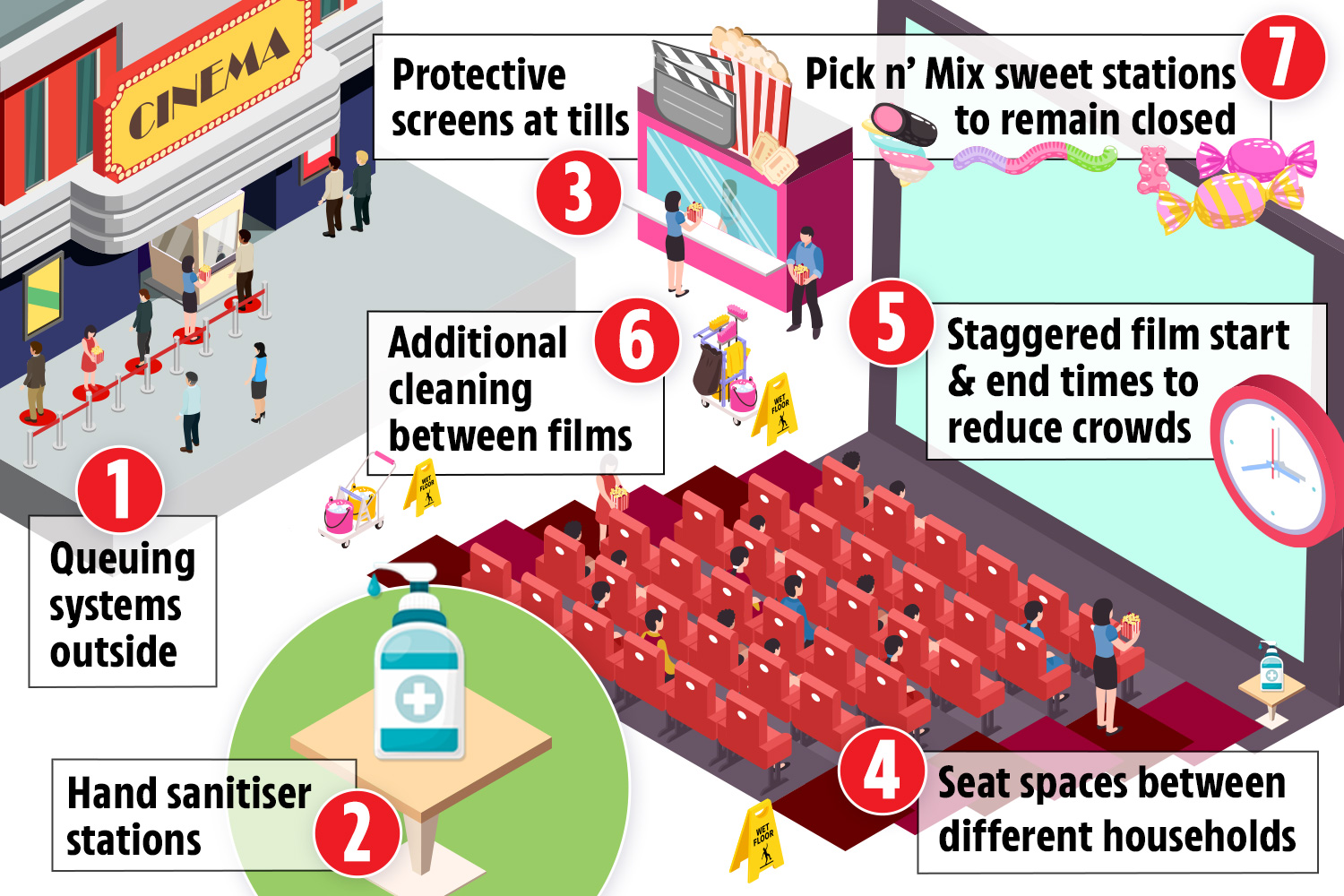 Cinemas in England are reopening on July 4.

Limited tickets are available at screenings as there must be at least three seats used to separate households.

The pick-and-mix sweet section of the cinema is going to stay closed.

Contactless payments are encouraged in venues in order to limit contact with staff.

Cinemas are expected to introduce staggered film start times to enable extra cleaning between screenings and a focus on online booking.

Plastic screens are expected to be installed at “key contact points”, such as till areas.

Cineworld is one chain that has delayed their reopening to July 31.

When will cinemas reopen?

HERE’S when some of the major cinema chains say they’re hoping to reopen if the government gives them the green light.

Hugging and other body contact is not allowed under the plans but people are now allowed to stay at each other’s homes overnight.

It means families are able to visit loved ones – although only 2 households can combine at any one time.

There is no limit to the number of households you can meet indoors or out, so long as it is one at a time. 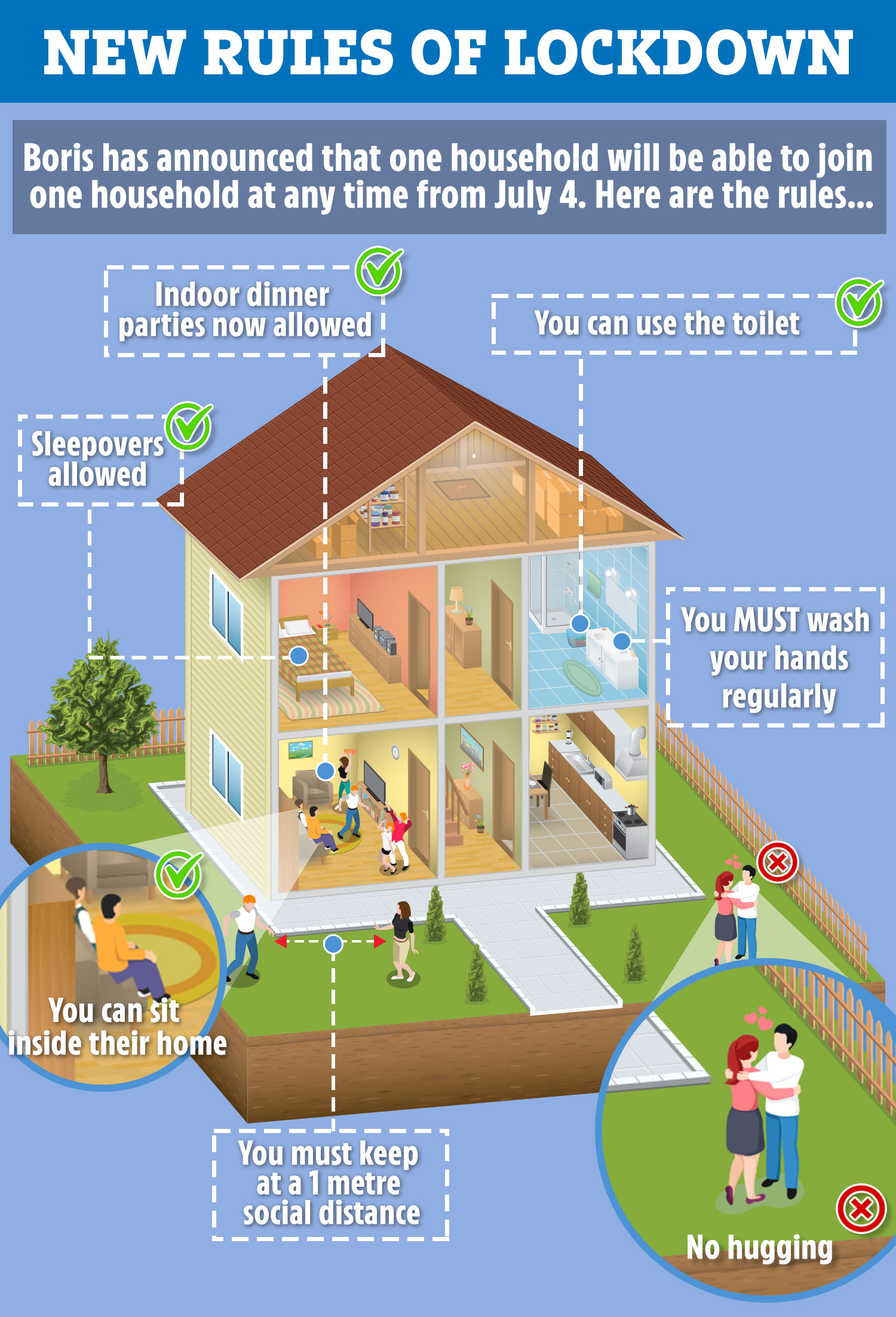 The rules for meetings indoors are ­separate from the “social bubble” plan that allows single-person households to join another household.

It lets them act as one household, meaning they can hug and kiss.

The rule allowing groups of up to six from six different households to meet outdoors remains unchanged.

Campers can rejoice as campsites have reopened from July 4 – as long as communal spaces remain clean and safe.

Campsites, along with caravan parks, hotels, B&Bs and holiday lets have reopened and people are allowed to travel to their second homes to stay overnight.

This includes one other household, meaning two households are able to go on holiday together.

Hairdressers all over the UK are fully booked up for five weeks, with desperate Brits keen to get rid of their lockdown look.

Some are opening at midnight, and some are said to be sticking to their normal 9am-5pm hours, but others say they plan to open their doors at 4am and work longer hours to get through their client list.

Workers are wearing gloves and a mask, and some salons have installed perspex screens above the basins too.

There is unlikely to be the usual chatter from your hairdresser, with talking kept to a minimum to reduce the potential spread of germs.

Outdoor playgrounds are open for as long as it can be done safely.

However, soft-play areas are still closed.

The opening of parks and outdoor spaces will mean kids have a space to run around and explore.

Some outdoor facilities such as tennis and golf have been open since May 13.

They now count as outdoor facilities and, with appropriate hygiene practices, like keeping our hands clean, will be safer. 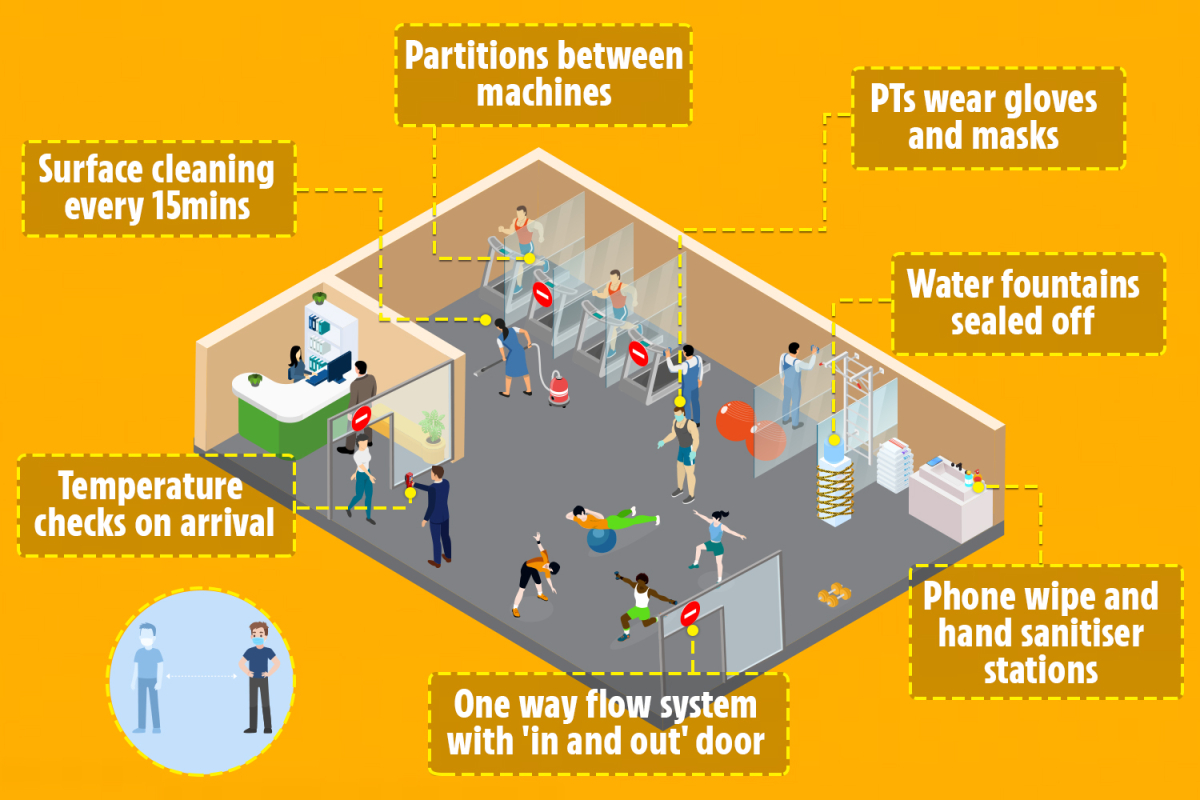 Gym sadly will not reopen on Super Saturday.

Instead, they are expected to open in mid July, although the PM did not give the exact date.

Speaking of Britain’s new freedoms, Mr Johnson told LBC on Friday: “The best way forward for the country is to get the economy moving again.”

He added: “We are going to reopen gyms as soon as we can do it in a Covid-secure way and I think that the date for reopening gyms at the moment, if we can do it, is in just a couple of weeks’ time.”