DEMI Lovato is engaged to her boyfriend Max Ehrich after five months of dating.

The 27-year-old singer announced the exciting news on Thursday in a series of sweet snaps of the couple kissing on a beach at sunset.

Demi wrote: “When I was a little girl, my birth dad always called me his ‘little partner’ – something that might’ve sounded strange without his southern cowboy like accent.

“To me it made perfect sense. And today that word makes perfect sense again but today I’m officially going to be someone else’s partner.”

The former Disney star went on: “@maxehrich – I knew I loved you the moment I met you.

“It was something I can’t describe to anyone who hasn’t experienced it firsthand but luckily you did too.. I’ve never felt so unconditionally loved by someone in my life (other than my parents) flaws and all.”

“You never pressure me to be anything other than myself. And you make me want to be the best version of myself. I’m honored to accept your hand in marriage.

“I love you more than a caption could express but I’m ecstatic to start a family and life with you. I love you forever my baby. My partner. Here’s to our future!!!!”

She then thanked her fans in the comments section, posting: “To all of my friends and fans commenting – I F**KING LOVE YOU – THANK YOU FOR SUPPORTING MY HAPPINESS.” 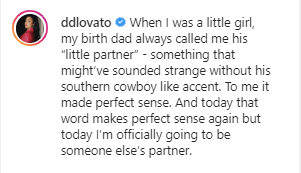 Max shared the sweet photos on Instagram too and declared that he will “forever cherish your pure, beautiful, infinite soul”.

You are every love song, every film, every lyric, every poem, everything I could ever dream of and then some in a partner in life.

“Words cannot express how infinitely in love with you I am forever and always and then some. I cannot spend another second of my time here on Earth without the miracle of having you as my wife.”

He went on: “Here’s to forever baby

“I LOVE YOU SO MUCH @ddlovato AND WILL FOREVER CHERISH YOUR PURE, BEAUTIFUL, INFINITE SOUL.”

Demi and Max were spotted celebrating their engagement at Nobu restaurant in Malibu wearing the same outfits as their photos shortly before their announcement.

The Disney Channel alum walked up to her man to drape a blanket around his shoulders and did not pick up that he was live streaming to his one million followers.

“I’m on live! I’m on live,” the soap star mouthed before Demi realized what had happened and walked out of frame, laughing.

Sources claimed they began dating several weeks before and have been isolating at Demi’s mansion in lockdown.

Back in April, sources revealed Max was planning to pop the question to Demi when lockdown was over.

Most Read in Entertainment


Megan Fox’s career and romance are both going great guns

An insider told Us Weekly: “Max plans to propose to Demi after this whole pandemic is resolved and their families wouldn’t be surprised by the proposal.

“They think they make a great couple,” the insider added.

The source said the pair have been “getting really serious” as they remain isolated together.

“The quarantine has been really great for Demi and her and Max have gotten so close.

In May, Demi amused fans when she revealed that The Young And The Restless actor was a former superfan.

The Stone Cold singer shared a December 2011 tweet from Max that read: “All I wanted for Christmas was Demi Lovato. #CantAlwaysGetWhatYouWant.”

She joked that the tweet was “manifestation” as he eventually “got” her.