THIS is the shocking moment a DJ spits Jagermeister out over parygoers in a packed Costa del Sol club despite the coronavirus surge in Spain.

Kokun Ocean Club in the holiday resort Torremolinos was trying to distance itself from the controversy today after footage of the incident went viral amid the pandemic.

He then spits the gulp over the crowd[/caption]

Video taken by a clubber at the popular Brit party spot showed tattooed DJ Fali Sotomayor putting the bottle of booze to his lips on the stage.

He then spits out what he had just drunk in a cloud of mist as tourists and locals go wild on the dance floor below him.

He then proceeds to pass the bottle round so dancers could take turns to sip the herbal liqueur as the dance track blares.

Sotomayor today apologised for what had happened – and admitted he acted “irresponsibly” amid the coronavirus resurgence in Spain.

Speaking on behalf of promoter Les Castizos, the Malaga-born DJ said: “We accept total responsibility for this incident and are ashamed and sorry about what happened.

“Kokun Ocean Club is in no way responsible for our actions and totally respected social distancing.”

Sotomayor added: “We feel indebted to the thousands of colleagues, artists, members of the public and other people who feel upset about what they’ve seen.”

A spokesman for Malaga hotel association Mahos added: “This shows a totally negligent attitude in what is a pandemic.

“We will never defend such an attack on public health.”

Local reports said the incident occurred on July 7, although the video only started circulating on Saturday.

Nightspots including discos have been linked to a huge number of the new coronavirus cases in Spain.

Regional governments around the country have been taking action close them or reduce their opening hours and the number of people who can be inside at any one time.

Fali Sotomayor apologised for the stunt[/caption]

Only one of the partygoers dancing to the music in the video can be seen wearing a face mask.

Aand even she had it round her chin leaving her mouth and nose exposed.

Since last Sunday Brit holidaymakers returning from Spain have had to self-isolate after the government announce a snap change to quarantine rules.

It followed a spike of new Covid-19 cases centred on Aragon, Catalonia and Madrid.

Holiday resorts in areas like the Canaries, the Balearic Islands and the Costa del Sol are trying to persuade the British government to create “safe” air bridges.

Local officials hope tourists can continue to jet to Spain without having to self-isolate when they return – with the economy being dependent of a return of tourism.

Some hotels have however said they will not be able to reopen for thesummer season due to the changes in the rules.

Figures on Friday showed Spain’s daily case count climb to 3,092 – the highest number since May 11 – and the number has been in four figures every day since July 16. 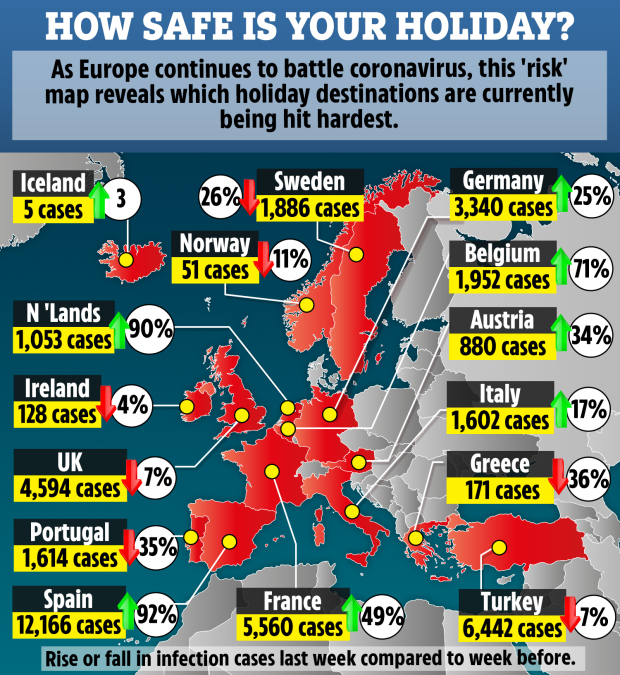 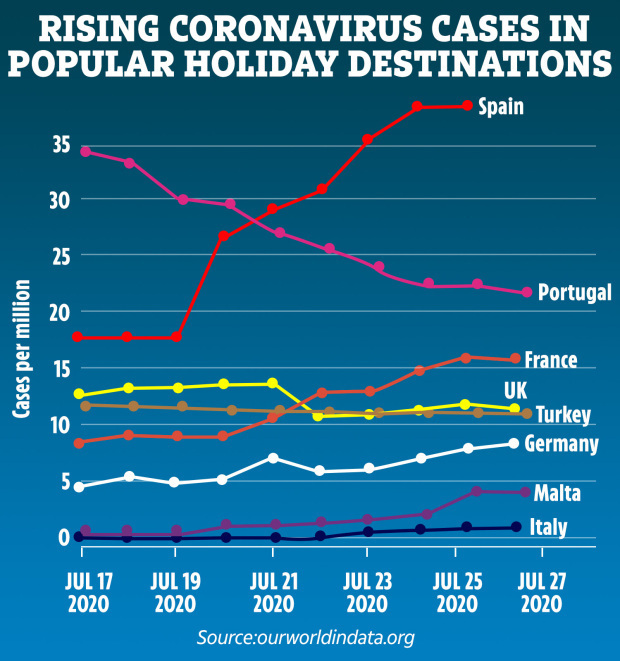 Spain first began easing its lockdown at the start of May, with different regions progressing through a four-phase process depending on the number of cases.

The country saw daily cases fall throughout May and June but, like many in Europe, has seen them begin to rise again in recent weeks.

The spike has prompted some areas reintroduce some restrictions on movement, and Britain and Germany have urged tourists not to visit Spain.

Some 600,000 Brits who have booked holidays to Spain now face two weeks isolation when they return how after the sudden rule change.

Prime Minister Boris Johnson this week said there are “signs of a second wave” in Europe.

The PM warned: “What we have to do is take swift and decisive action where we think that the risks are starting to bubble up again.

“Let’s be absolutely clear about what’s happening in Europe, amongst some of our European friends, I’m afraid you are starting to see in some places the signs of a second wave of the pandemic.”

European nations had been hopeful of reopening after being ravaged by the virus in March and April as the epicenter of the pandemic shifted to South America and the US.