ARSENAL have reportedly SACKED the man responsible for disocvering the likes of Hector Bellerin, Gabriel Martinelli and Cesc Fabregas.

It was announced on Wednesday that the London club are set to make 55 staff redundant as a result of the coronavirus pandemic.

And according to Mail Online, one of the casualties of the cost-cutting is famed global scout Francis Cagigao.

The 51-year-old has been with the Gunners for over a decade, and helped the club unearth some real gems along the way.

Cagagio was responsible for bringing Fabregas in from the Barcelona academy as a 15-year-old in 2003.

He also scouted Bellerin from the Catalans before Arsenal made their move in the summer of 2011.

Francis Cagagio was influential in the club signing Cesc Fabregas[/caption]

And more recently he was influential in the club signing Martinelli from little-known Brazilian side Ituano.

Fellow scouts Peter Clark and former Reading boss Brian McDermott are also understood to be at risk of losing their jobs.

In the club statement, Arsenal insisted it had to ensure the Gunners emerged “in a robust and strong position for the future” after the coronavirus crisis.

Arsenal added: “Our main sources of income have all reduced significantly.

“Revenue from broadcasters, matchday and commercial activities have all been hit severely and these impacts will continue into at least the forthcoming season.”

Arsenal are estimated to be facing a £100m price for the Covid-19 outbreak over this season and next,

Conceding it was “one of the most challenging periods in our 134-year history” Arsenal pointed to the fact that “our players, senior football staff and executive team have volunteered pay cuts”.

And fans online were quick to question the morals of multi-billionaire owner Stan Kroenke and Mesut Ozil who sits on £350,000-a-week.

The North Londoners are owned by mega-rich American sports tycoon Kroenke whose net worth is a staggering £6.31BILLION – which is 10,286 times Ozil’s weekly wage.

Fans recently flew a “Kroenke Out” banner over Arsenal’s defeat at Villa Park.

And supporters online reacted in angry fashion to this latest decision by the Gunners’ hierarchy.

Easy on the Ay 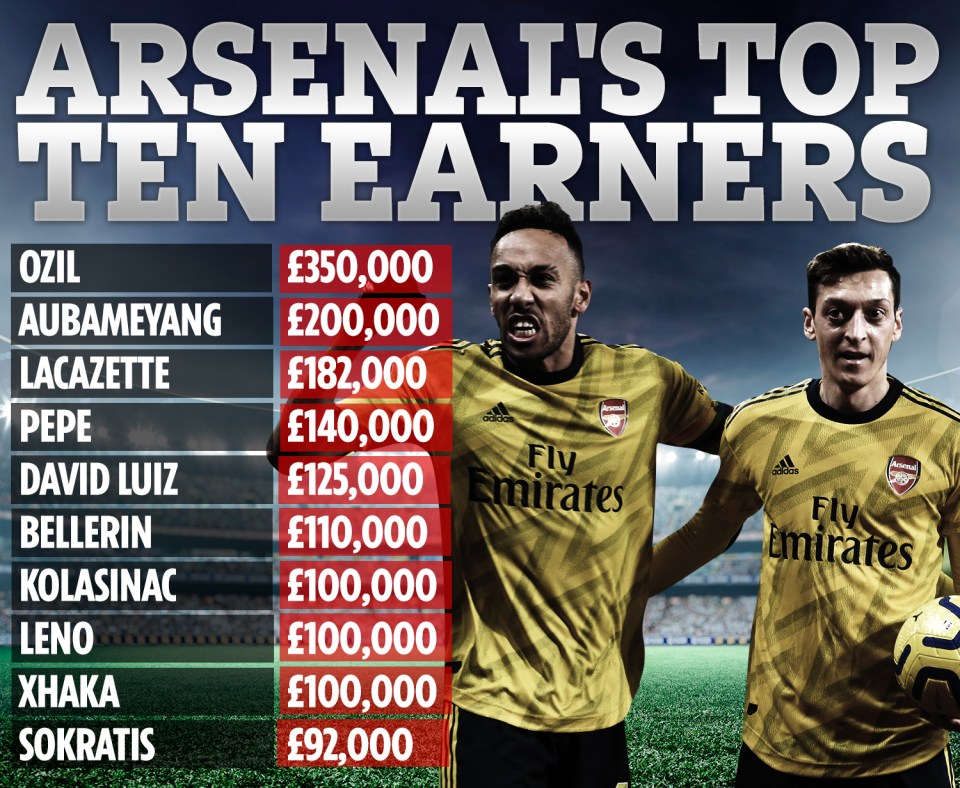 One wrote: “If the jobs are genuinely redundant, it is what it is but if, as I suspect, we’re letting people go as a cost saving measure to pinch a few grand here & there, it’s f***ing rank given how much money our owners are worth.”

Another disgruntled user tweeted: “55 job losses to celebrate the FA Cup win whilst Mesut Ozil is on £350k-a-week. Could never be my club.”

And another added: “Only makes the Ozil situation that much more depressing, seeing as his wages would comfortably support keeping those 55 jobs + others.”