BRITAIN faces another day of violent thunderstorms today as a week of extreme weather finally comes to an end.

Weather warnings are once again in place for most of the country with thunder, lightning, hail and torrential rain forecast. 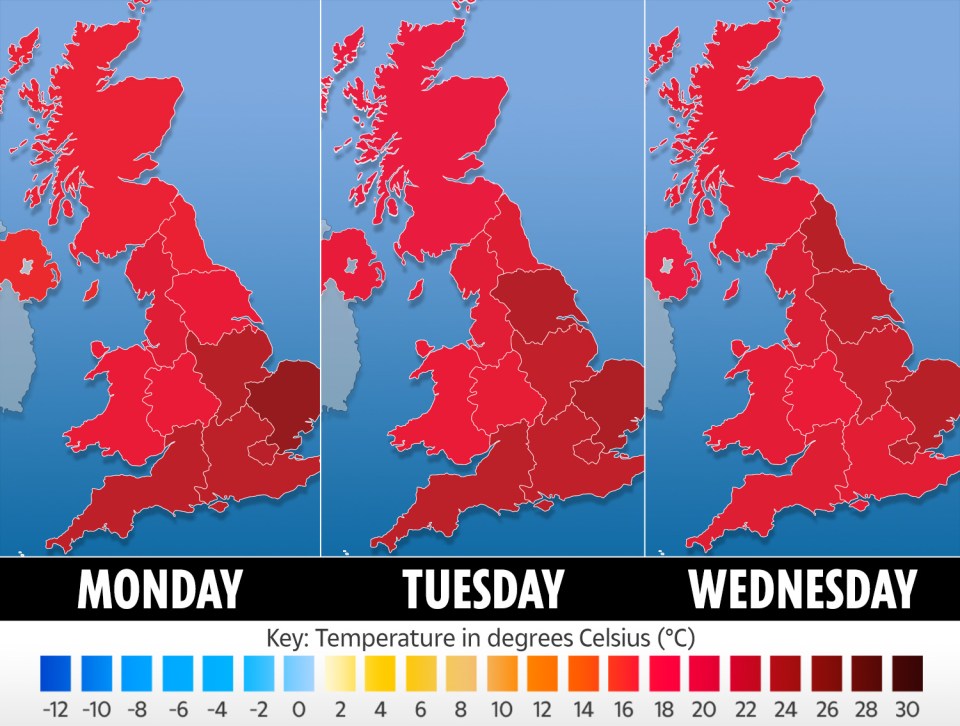 The country has been battered by “biblical” storms for a week and some areas still face a month’s rain in a few hours.

The good news is that Monday marks the end of the worst of the weather for now with no more warnings in place for the rest of this week.

But the bad news is that there is no end in sight to the rain with showers predicted for days to come.

In Bishop’s Stortford, Hertfordshire, fire crews were called to rescue two people and a dog after their car got stuck in floodwater.

Floods also hit Essex with a string of roads affected.

And Greater Anglia said floods had delayed and cancelled train services in the Colchester area.

The Meadows shopping centre in Chelmsford was evacuated due to a fire as thunderstorms struck.

And Red Arrows displays in London, Cardiff, and Edinburgh to commemorate VJ Day were called off due to bad weather.

The wet weather has seen bookmaker Coral cut the odds of this being the wettest summer ever to 1-2.

Coral’s John Hill said: “With more rain scheduled to fall next week, we look on course for having the wettest summer on record this year.

“Temperatures are also set to drop over the next few days so the odds have drifted on this month being the hottest August since records began.”

The Met’s Chief Meteorologist Frank Saunders said: “Up until Monday Thunderstorm warnings cover much of England and Wales.

“The storms will not affect all areas, but where they happen there will be frequent lightning, gusty winds and intense, heavy downpours.

“The hot weather is slowly subsiding now, with more cloud, but it will still be very warm and humid.

“In contrast to the last few days, maximum daytime temperatures will be reducing.”


Who is related to Winston Churchill?

Neil Davies, Flood Duty Manager at the Environment Agency, said: “Isolated thunderstorms could bring sudden surface-water and river flooding, which may lead to flooded properties and severe travel disruption in some areas.

“Further surface water and river flooding is also a possibility.

“Environment Agency teams are working hard alongside local authorities to reduce the risk of flooding and keep communities safe.

“We urge people to check their flood risk.”