DILLIAN WHYTE faces one more hurdle before moving a step closer to facing Tyson Fury – and that is beating Alexander Povetkin.

Whyte headlines the final shows in Eddie Hearn’s ‘Fight Camp’ staged in the garden of his Matchroom HQ in Brentwood. 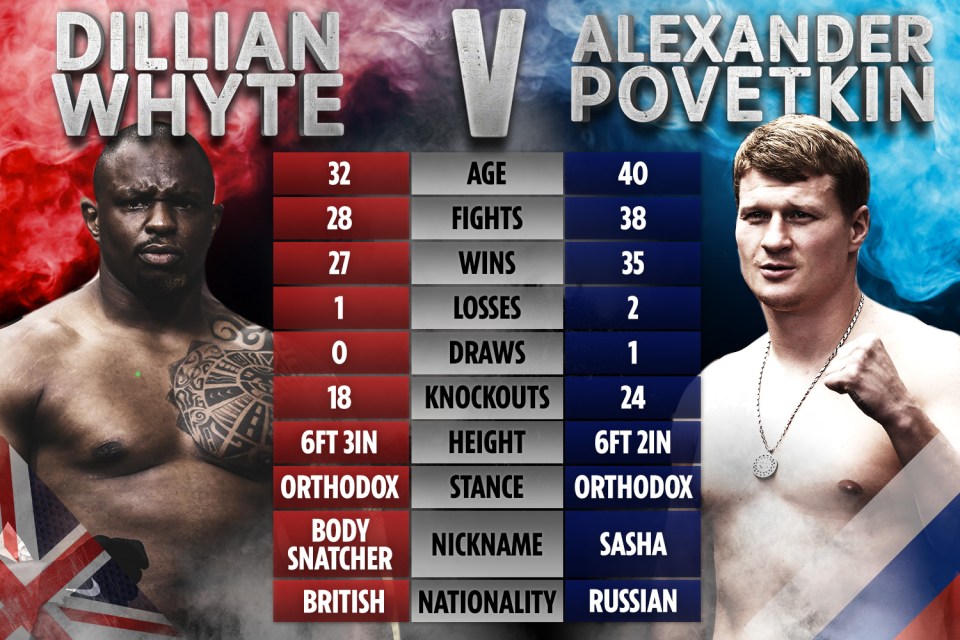 The 32-year-old puts his WBC mandatory status on the line, with Povetkin ready to spoil the party.

Billed “Battle of the left hooks” – the two heavy-hitters will be hoping to produce fireworks in front of an empty show.

Here SunSport breaks down the fight.

Since his only loss in the paid ranks, to Joshua in 2015, Whyte has become one of the most improved heavyweights in the world.

His power and lead hook has always been prominent, but now he is boxing with educated pressure and a forceful jab.

Whyte is also a great in-fighter, managing to fire off quick combinations when pressed up against opponents.

Managing to box to strict tactics and avoid being overzealous has steered him to massive victories over the likes of Joseph Parker, Dereck Chisora and Oscar Rivas.

He has also proven to be resilient, picking himself off the canvas against Parker and Rivas, when leading the fight, to regain composure before earning a decision.

Against Chisora in their second fight, Whyte was even behind on the two of the scorecards, but remained calm, not forcing the fight, before finishing with a devastating round 11 KO.

What Whyte may lack in hand speed he makes up for in timing and power and when coming forward the former kickboxer takes a lot to stop.

Dillian Whyte is mandatory for the WBC title [/caption]

Despite turning 41 next month, Povetkin is still considered one of the most dangerous punchers in the blue ribbon division.

His performance against Anthony Joshua in 2018 – which saw him KO’d in round seven – is evidence to the claim.

He had AJ wobbled in the opening stages with sneaky hooks and uppercuts on the inside.

Povetkin’s ability to generate powerful shots on the inside is a big advantage, bearing in mind how dangerous he is in mid-range.

The Russian’s left hook is his biggest weapon, the punch that laid out David Price in 2017.

But Povetkin did box lethargically against Michael Hunter last December, but somehow escaped with a draw.

He was often beaten to the punch and outworked by his younger opponent.

Keeping a fast pace is key to beating the ex-world champion, or else risk allowing Povetkin to control the range and set up power punches.

‘THE MAGIC OF TV’

WEIGHT OF THE WORLD

Up until two years ago, Povetkin had never been KO’d, losing only to Wladimir Klitschko on points.

But AJ’s ability to to use punches in bunches up close and utilise a better jab set him up for the finish with the Russian on the back foot.

Whyte on the other hand has a different style to Joshua, relying more on heavier shots rather than faster combinations.

Povetkin, though, has proven he can sustain single shots, meaning Whyte could be forced to set a high tempo to try and draw a knockout win.

That would risk trading punches with his opponent, whereas his jab, strength and steady work rate could steer the Brit to a more comfortable points win.

With so much on the line for the WBC interim champion, and Povetkin coming with nothing to lose, fighting tactically and securing the judges verdict could be the likely outcome for Whyte.