Travel The French regions with R rates above 1.5 as...
Travel

The French regions with R rates above 1.5 as southern France hit the worst due to holidaymakers

THREE regions in France have seen the R-rate rise above 1.5 as new Covid-19 infections increase per day.

France, which was placed on the UK’s quarantine list on August 15, is facing a potential second wave as new daily cases hit similar levels last recorded in May.

A number of French regions have exceeded the R rate of 1.5 including Bordeaux, pictured here[/caption]

Using data from the European Centre for Disease Prevention and Control (ECDC), any countries which have more than 20 new cases per 100,000 population, during a seven day period, face being removed from the travel corridor list.

Three regions in France have been hit particularly hard, many of which include popular holiday destinations.

Nouvelle-Aquitaine, home to Bordeaux and La Rochelle, has an R number of 1.78, higher than France’s average 1.34. 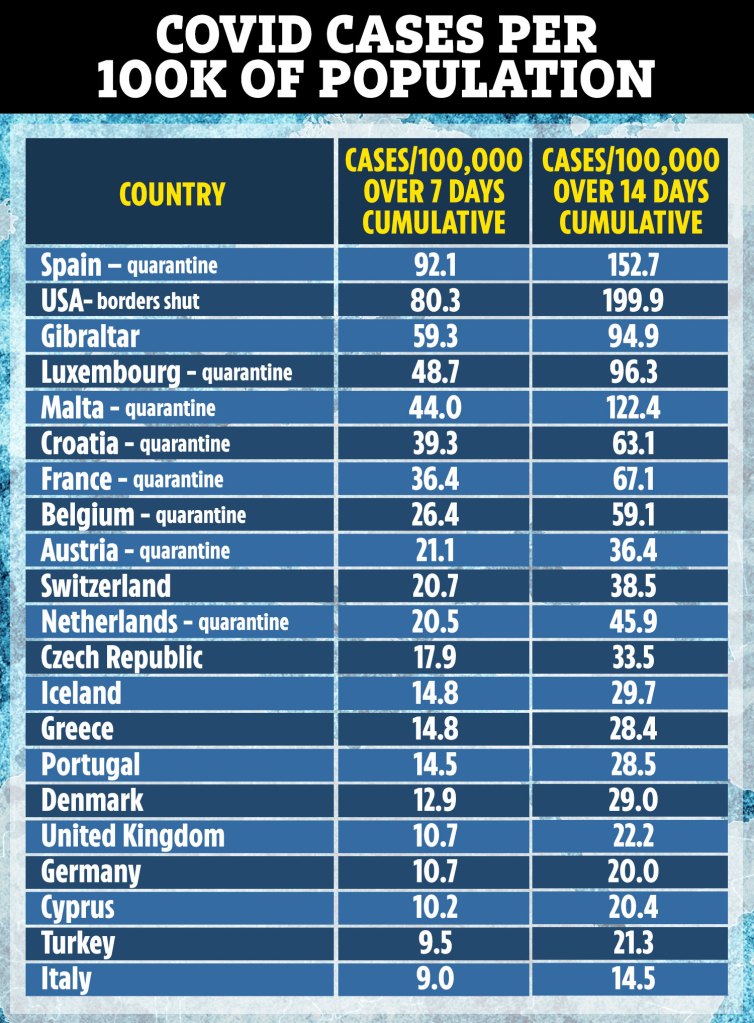 Occitanie, where Toulouse is located, is at 1.6 while Provence-Alpes-Côte d’Azur, with coastal regions including Nice and St Tropez, is at 1.52.

According to local media, millions flock to the coastal regions during August for a last minute holiday, which is likely to have attributed to the jump in cases.

One holidaymaker told Euronews: “I’ve never gone on holiday with a mask. This is really contrary to what holidays are about. I don’t wear it all the time, even if it’s required.”

The R number determines how many people an infected person spreads the virus to – anything under 1 means cases begin to recede.

Anything over 1 and cases are at risk of spreading.

Face masks are mandatory in a number of locations[/caption]

The French ministry is currently discussing whether local lockdowns need to be enforced, with face masks already mandatory in public across busy streets in Paris and Toulouse.

They said in a statement: “The circulation of the virus is progressing markedly, and is at its most intense among young adults.”

France may reciprocate the UK’s quarantine rules, meaning Brits would have to self-isolate for two weeks on arrival.

Anyone who chooses to ignore the travel advisory and head to France, would then face being forced to quarantine for two weeks in France, and then two weeks in the UK.

France is unlikely to be removed from the UK quarantine list any time soon, and only will when cases go down again.

Most read in News Travel


How cabin crew are trained to save lives at 37,000ft including CPR in the aisles


EasyJet boss under fire as 99.9 per cent of pilots have no confidence in him

Thousands of holidaymakers frantically tried to get back to the UK last weekend after the announcement of the French quarantine was announced on August 13, and enforced by August 15 at 4am.

A famous nudist colony in France has seen an outbreak of coronavirus after 100 people tested positive.

People have been warned to stay away to prevent the virus spreading further.

Spain holidays will be back on for summer, country’s tourism minister declares – Bukipress

SPAIN will bounce back to becoming a first-choice sun...
Read more
Travel

Virgin Holidays sale has package holidays from £509pp including Orlando, New York and the Caribbean – Bukipress

Alton Towers launches sale with 40% off 2021 theme park short breaks, including over the school holidays – Bukipress

ALTON TOWERS has launched a flash sale with up...
Read more
Travel

NEXT time you head to Venice on holiday, you’ll...
Read more