German cops told the 45-year-old British woman she will be a “crucial witness” if the paedophile goes to trial over the 2007 abduction of the three-year-old.

Detectives flew to the Algarve and questioned her over her relationship with Christian B who is suspected to have kidnapped and murdered Madeleine, reports the Mirror.

She reportedly works as a barmaid in the popular tourist region which includes the resort town of Praia Da Luz, where Madeleine was snatched from and Christian B lived around the same time.

The woman is said to be living in fear and is too scared to reveal her identity.

She claims he terrorised her while they were together and dreads one day he may be freed from prison.

Cops are said to have assured her that Christian B will remain behind bars for a long time as the investigation continues into his alleged links to Madeleine.

German police interrogated the woman for 12 hours and described her as an “important character witness”.

She was originally due to be flown to Germany to face questioning, but is reported to have refused to leave Portugal.

The interview last month reportedly was the first time German cops have been allowed to work the case in Portugal.

Other former colleagues from a Lagos bar where both she and Christian B worked were also reportedly interviewed by detectives.

German proseuctors have consistently said they believe Madeleine is dead and they are sure the convicted paedophile is behind her abduction.

However, no charges have been filed and fears grow that police may never be able to bring a case against him. 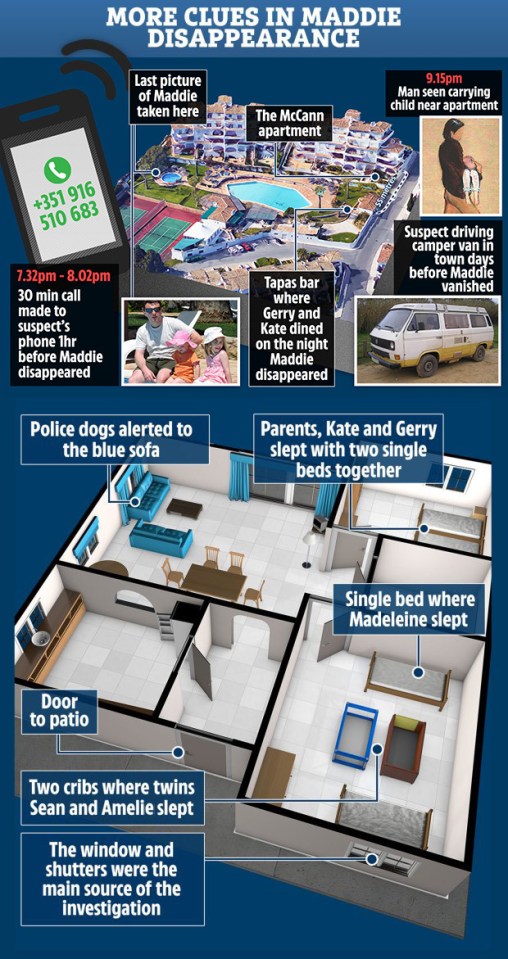 A pal told The Mirror: “They wanted to know everything she knew about Christian and all about everything he did to her.

“They said every little detail about him was useful to help analyse behaviour patterns.”

The source added: “They told her not to worry about him being released. They said he’s going to be inside for a very, very long time. “

“It was grueling and upsetting for her. She was really upset but they reassured her, saying she was an important character witness.”

Christian B is said to have tormented his ex when they dated in 2004 and 2005 – two years before Madeleine vanished from her family’s holiday flat at the Ocean Club.

The woman claims he broke into her apartment and lay in wait for her under her bed before attacking her in a jealous rage.

The sex offender is also claimed to have repeatedly slammed her head against a wall in the ladies toilets of the bar where she worked.

Another ex-girlfriend of Christian B’s told last month that he abused her five-year-old daughter before taking graphic pictures of the child.

She said: “I believe he abused my daughter on three occasions, but the police only charged him for the one occasion because they had photos of the abuse.

“I am sure he abused other children. Some parents used to leave their kids with him, especially those parents on welfare.”

The indecent images of the girl were found among a hidden stash of 391 photos and 68 videos showing youngsters being abused, it has previously been claimed.

It was discovered when police raided his home in Braunschweig for a separate allegation of domestic abuse.

Cops then found the girl, who had moved to another part of Germany with her mum but Christian B had already fled to Portugal.

The woman also revealed how “aggressive” Christian B would often hit her when he was drunk or “in a bad mood”.

German police claimed they had ‘concrete evidence’ Madeleine is dead[/caption]

Christian B, 43, is currently serving a 21-month sentence in Germany for drug offences after he was sensationally named as a suspect in June.

The serial sex offender is also facing a separate sentence for the rape of a 72-year-old American woman on a waterfront villa less than a mile from where Madeleine went missing.

Hans Christian Wolters, the chief prosecutor in the case, has insisted that the Christian B is their man and they can place him at the scene.

Madeleine is believed to have been snatched from the holiday apartment where she was sleeping alongside her twin siblings Sean and Amelie on May 3, 2007, in Praia du Luz.

Described as a “twisted loner”, Christian B is understood to have been a kind of drifter around the resort at the time.

He was first linked to the Madeleine case after he allegedly made a drunken boast he snatched her while in a bar on the tenth anniversary of the crime.

Madeleine would have turned 17 this year, and the family have described the identification of Christian B as “potentially very significant”.

Experts have said Christian B matches the profile of a Jimmy Savile-style “paraphiliac”, who targets victims of all ages.

His ex-lawyer Serafim Vieira has described him as having “‘psychopathic traits” and admitted he could be responsible for Madeleine’s abduction.

Christian B had a rundown and dilapidated shack only two miles away from the McCann’s holiday let.

And he is known to have owned a mobile home he boasted could carry “drugs and children”.


Author Shanna Hogan, 38, dies after drowning in pool in front of her baby

Christian B is now being linked to another sex attack in Salema, six miles from Praia da Luz, just one month before Madeleine vanished.

A German woman has told police she recognised Christian B from TV reports as the man who attacked her in April 2007 when she was ten.

The victim, now 23, said a man grabbed her on the beach. He performed a sex act on himself and then ran off.

However, a series of bungles in the police investigation have cast doubt over whether prosecutors can secure a conviction.