KIM Jong-un is primed to test Joe Biden with a barrage of nuclear missile launches timed around his inauguration, experts fear.

The worrying new comes as it is claimed the North Korean tyrant – who once called the President-elect a “rabid dog” – is raging over the election result.

Any new launches from Kim’s military would quickly spark another tense nuclear stand-off between the US and the heavily-sanctioned rogue state.

“It is possible Pyongyang will conduct a nuclear or long-range missile test prior to the inauguration or shortly thereafter,” said Evans Revere, of the Council on Foreign Relations.

He told Time.com the move would be a way of  “laying down a marker with the new president and increasing its negotiating leverage with Washington.”

The former State Department official added Biden will be quick to learn from his predecessor’s mistakes.

“The Biden team will be mindful of the failings of Trump’s approach, which has amounted to turning a blind eye to North Korea’s steady accumulation of nuclear weapons and testing of medium-range missiles,” said Revere.

Kim has a history of trying his luck with new presidents and reports from the region say he is “very unhappy” Trump has been toppled.

Others experts also believe Kim may soon be up to his old tricks once more.

“North Korea has historically ramped up tensions early in a new U.S. and South Korean administration to, in the words of a North Korean defector, ‘train them like a dog’ and induce concessions,” said Bruce Klingner, a senior fellow at the Heritage Foundation.

After Barack Obama won his first term as US President the North Korean military launched a ballistic missile over the Sea of Japan.

The regime did the same on the 23rd day of Donald Trump‘s presidency.

Trump later claimed to have formed a “special friendship” with Kim, but there is no certainly no love lost between Biden and North Korea’s dictator.

The regime’s state broadcaster once called him a “rabid dog” who should be “beaten to death with a stick”.

KCNA said: “Rabid dogs like Biden can hurt lots of people if they are allowed to run about.

“They must be beaten to death with a stick, before it is too late.”

The bizarre attack came after the former US Vice President branded Kim a “tyrant” and “dictator” and compared him to Hitler.

Just last week, it was reported North Korea was developing a doomsday nuclear sub capable of wiping out enemy targets anywhere on the planet.

And in October, Kim’s military paraded the world’s largest mobile nuke which can wipe out any US city and kill at least 1.5million people in seconds. 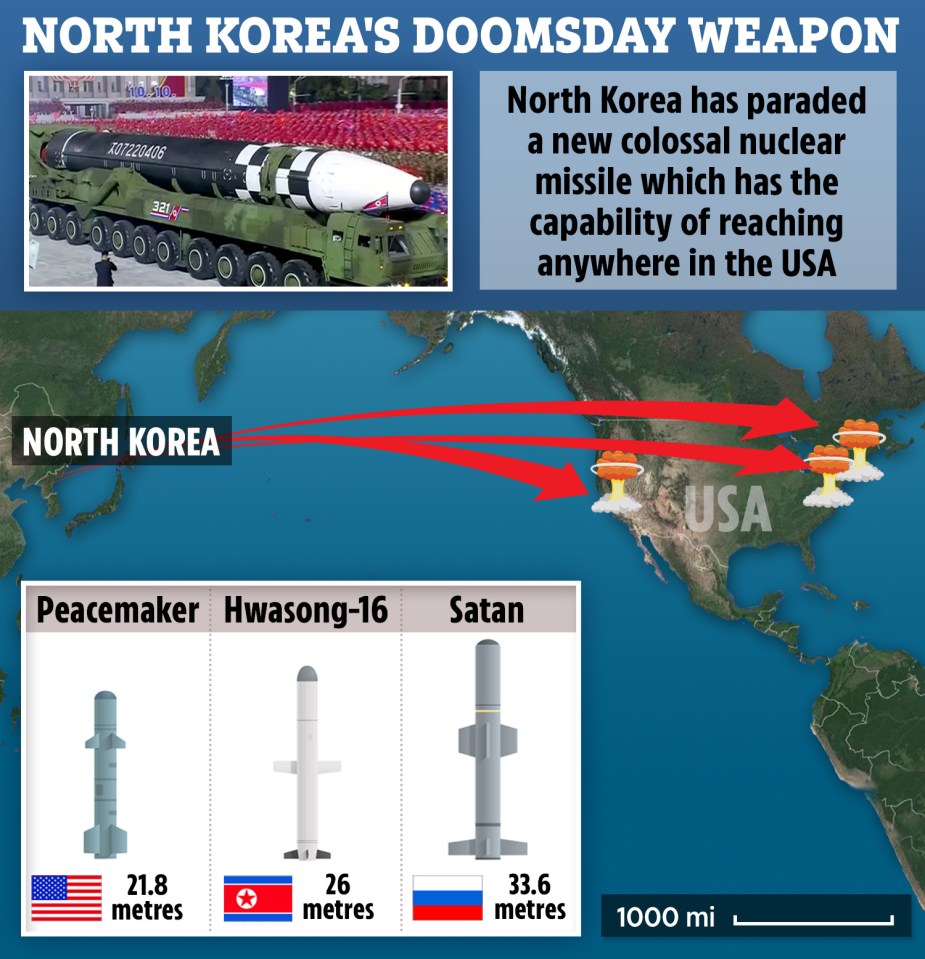 Experts believe the “monster” intercontinental ballistic missile (ICBM) would be difficult to locate and destroy – and be able to fire decoys to outwit anti-missile defenses.

During celebrations marking the 75th birthday of the ruling Workers’ Party in the capital Pyongyang, Kim paraded the a Hwasong-16 ballistic missile which was carried on an equally huge launch vehicle with 11 axles.

Xu Tianran, an Analyst for Open Nuclear Network, told the Sun Online the missile was bigger than the DPRK’s previous ICBMs.


Why does Siri say Kamala Harris is President when you ask how old he is?

WRITING’S ON THE WALL

He said: “If this project is realised, it would further raise the threat level to the US.

“However, it does send a strong political signal, and reflects the leadership’s preference for an even larger weapon.

“It could probably reach the whole of the US with a very large, high yield nuclear warhead, or two or more warheads if the warheads are smaller and lighter.”