A CHILLING map shows how the coronavirus was spreading around the world months before China acknowledged the outbreak.

Surveys of blood samples taken last year suggest the virus was present in the US from mid-December and in Europe as early as September. 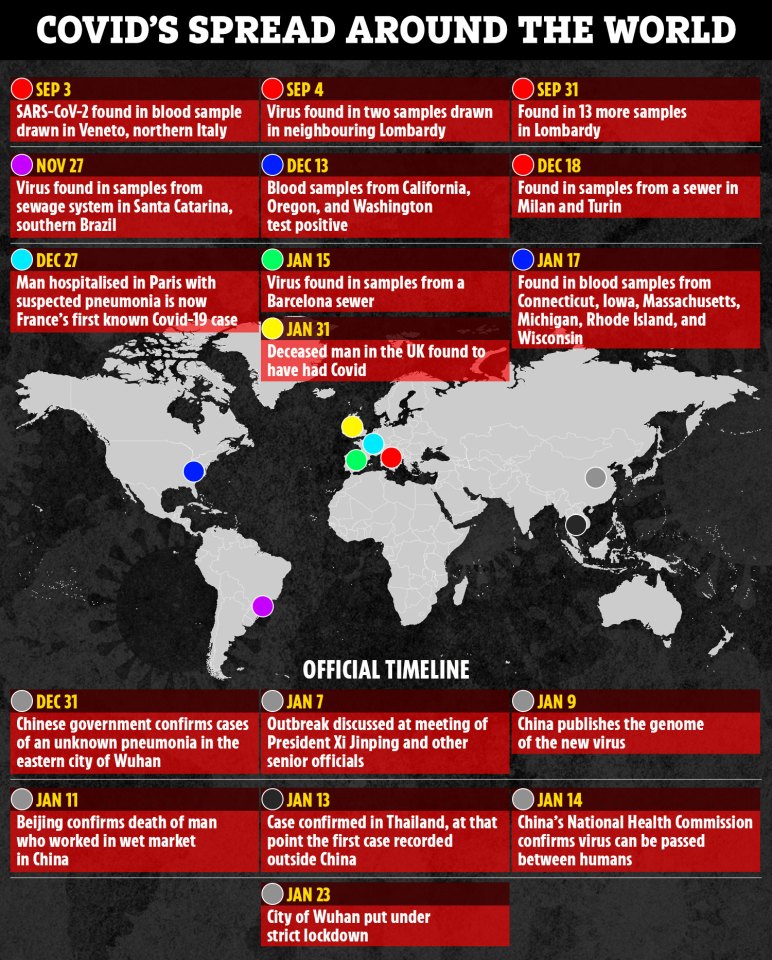 China first confirmed it was treating patients for an unknown type of pneumonia in the eastern City of Wuhan on December 31, but has long faced questions about a possible cover-up.

Doctors who tried to raise the alarm on social media before the outbreak was confirmed by authorities have reported being detained and accused of trying to spread panic.

Journalists attempting to cover the issue also reported being detained and having their equipment confiscated.

A new study by the Centers for the Disease Control has now suggested the virus was already in the US more than two weeks before Beijing announced it was treating patients for an unknown pneumonia in Wuhan.

Scientists currently believe the virus was transferred to humans from a wild animal traded on a wet market in the city.

Traces of the virus were identified in blood samples taken by the Red Cross in California, Oregon, and Washington on December 13 and 16, the Mail reports.

The virus has also been found in samples taken from a sewer in Satan Catarina, southern Brazil on November 27, and in blood samples take in northern Italy as early as September 14.

Leaked documents have previously suggested that cases were identified in Wuhan as early as November 17.

Even after the pandemic got underway, Chinese officials were accused of underreporting the number of new infections by as much as half.

Beijing is thought to have wanted to play down the extent of the virus’s spread to save face and cover up its poor handling of the initial outbreak.

Speaking to the BBC in July, leading Chinese virologist Professor Yuen Kwok-yung, who went to Wuhan in January, claimed that local officials destroyed evidence and were slow to react to what they were being told by scientists.

“I do suspect that they have been doing some cover-up locally at Wuhan,” he said.

“The local officials who are supposed to immediately relay the information has not allowed this to be done as readily as it should.”

Most read in World News

'TRIED TO KILL HER'

One senior former MI6 officials also said ministers in the British government and warned “not to believe Beijing’s claims” about the situation in China, the Mail reported.

According to official figures, China has had only 86,551 coronavirus cases and 4,634 deaths since the start of the pandemic.

That compares to 64.4million cases and almost 1.5million deaths globally.