THE mystery disappearance of Brit hiker Esther Dingley has taken another twist amid claims someone was spotted sleeping in her campervan – 10 days after she vanished.

A local dog walker – called Lucia – says she saw a figure asleep on the back seat of the Fiat Chausson in the Spanish town of Benasque on December 2.

Esther Dingley has not been heard from since November 22[/caption]

Esther, 37, vanished during a trek in the Pyrenees more than two weeks ago and has not been heard from since sending a mountain-top selfie to her boyfriend Daniel Colegate.

The Durham-born adventurer parked up and left the van around November 16 – and vanished after last being seen by hikers on November 22.

Lucia told MailOnline: “I saw someone sleeping in the back of the caravan car and I couldn’t believe it.  I first saw the light on when I took my dog out at about 7pm. It seemed a bit strange.

She claims Spanish cops have “fobbed her off” after she took pics of the abandoned camper and raised her concerns.

Guardia Civil impounded the van three days after the sighting and it remains parked in a police compound.

It’s reported police initially said the person spotted was a forensics officer but have since declined to comment.

It raises further questions over Esther’s disappearance – as cops questioned her 38-year-old boyfriend for a third time.

They insist he’s a witness and not a suspect in the case but he’s been quizzed over the pair’s messages – after cops said her home life was not as  “idyllic” as her social media snaps suggested.

Capitaine Bordinaro told MailOnline: “We interviewed Daniel Colegate at the farmhouse where he is living in the Gers department on Monday.

“We want to investigate all possibilities. We do not rule any line of inquiry.

“But it does not seem probable that Esther suffered an accident, and it is not credible that she was eaten by a bear or that she has fallen into a lake.”

He added his officers believe adventurous Esther’s disappearance is either the result of an accident or “as a result of someone else’s actions.”

The top cop added his team had met with Esther’s partner to go through his and Esther’s social media pages.

“It appears that their lives together were not as happy as the images posted on social media suggest,” he said before stressing Dan was interviewed as a witness and not as a suspect.

He was also spoken to by the French Gendarmes and the Spanish Guardia Civil last week about Esther’s disappearance. 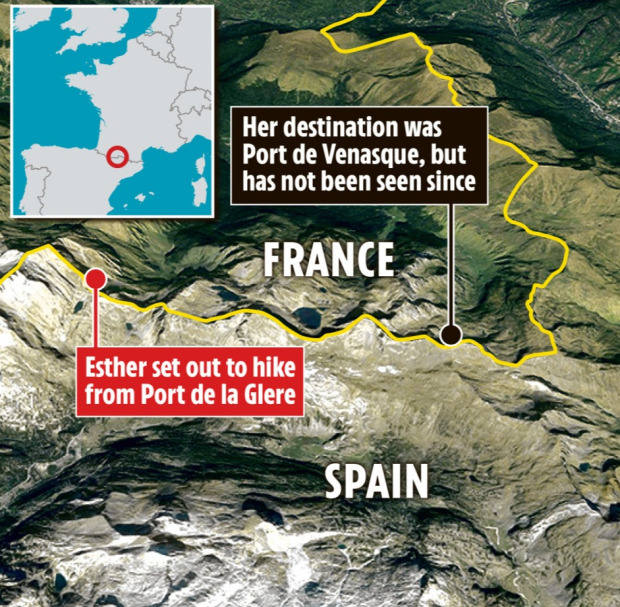 Authorities have already said they are now exploring the possibility that Dingley’s disappearance was not a mountain accident.

“She’s a strong girl and the thing is, the longer it goes on, you wonder has she been kidnapped?” she said.

“If she had an accident they would have probably found her. I feel like I’m living a nightmare. Her father Henry is broken.

“She’s his only daughter. He’s in pieces.”

Esther is thought to have last been seen by Spanish Olympic skier Marti Vigo del Arco and his girlfriend on November 22.

The couple said they were on a descent at around 3pm when they met an English woman who was still ascending.


Trump 'will step down so Pence can pardon him before Joe's sworn in, NY AG says


SWAT descends on synagogue 'with distraught person barricaded inside'

They added that they didn’t see anyone else coming up the mountain after the encounter.

Around an hour later, Dingley sent a selfie from the summit of the Pic de Sauvegarde to partner Dana.

Authorities have said the disappearance is particularly strange given that the Brit was an experience climber, was trekking in good weather, and had a clearly defined route for the final days of the trip.

Thick snow may make a full search impossible until spring[/caption]