coronavirus Online Covid vaccine calculator reveals some will have to...
coronavirusHealthMedicines vitamins and vaccinesNews

AS a second approved vaccine is rolled out from today, everyone wants to know when they will be given their jab.

But an online calculator is telling millions they won’t be in line until 2022 – and that’s providing the speed of vaccinating can be significantly ramped up.

Click here to use the online Covid vaccine calculator

Brian Pinker, 82, was the first to receive the Oxford University/AstraZeneca Covid-19 vaccine outside of clinical trials on December 4[/caption]

Margaret Keenan, 91, the first Briton to receive the Pfizer jab, got her second dose on December 29[/caption]

The tool can help you work out how long you might have to wait – and how many people are in front of you in the queue.

Based on the Government’s priority list, it considers your age, your health, and whether you work in the NHS.

The tool can be adjusted based on how fast the vaccines are deployed, with a speedy operation the key to ending lockdowns.

It comes as the Oxford University and AstraZeneca was given to the first people in the UK today after MHRA approval last week. It is the second jab to be given the green light after the one made by Pfizer/BioNTech.

Along with the 30 million doses of Pfizer’s vaccine, the UK now has enough doses ordered to vaccinate the entire population.

Some 15 million people are expected to be jabbed by February, and 24 million by Easter.

Scientists, including members of SAGE, have warned the Government must scale up vaccination to 2 million per week in order to avoid tens of thousands of deaths in the next six months.

However, the pace at which injections have started has been slow, with less the one million receiving their first dose of the Pfizer jab in one month.

And only 530,000 of the Oxford jab are ready to go from today, despite the UK buying 100 million doses last year, and AstraZeneca boss Pascal Soriot promising the firm could hit 2 million doses a week by mid-January,

It casts doubts on the pandemic ending “by spring”, as claimed by the Health Secretary Matt Hancock last week.

The jab, from Oxford and AstraZeneca, gives up to 70 per cent protection 22 days after the first dose.

People won’t need their second dose for another three months – allowing medics to roll the first jabs out to as many people as possible.

On the December 8, Margaret Keenan became the first person in the UK – and the world – to receive an approved Covid-19 jab.

When will you get your vaccine?

Omni’s vaccine queue calculator will estimate for you how many people are ahead of you in the queue to get a Covid vaccine in the UK.

It also predicts how long you might have to wait to get your vaccine.

All you need to do is enter your age, job and if you have a health condition.

It’s based on the Government’s priority list and the likely rate of vaccination.

The tool assumes that one million people will be vaccinated in a week, which would take just over two years to vaccinate everyone.

Adjusting this to two million per week would mean everyone is innoculated in a year.

But at the current pace – 250,000 per week – it will take eight and a half years to vaccinate everyone, the calculator predicts.

Omni also predicts 70 per cent of people accept their jab offer, based on flu vaccine uptake, but in reality this could be lower.

Under the current pace:

With a vaccination rate of one million people per week:

With a vaccination rate of two million people per week: 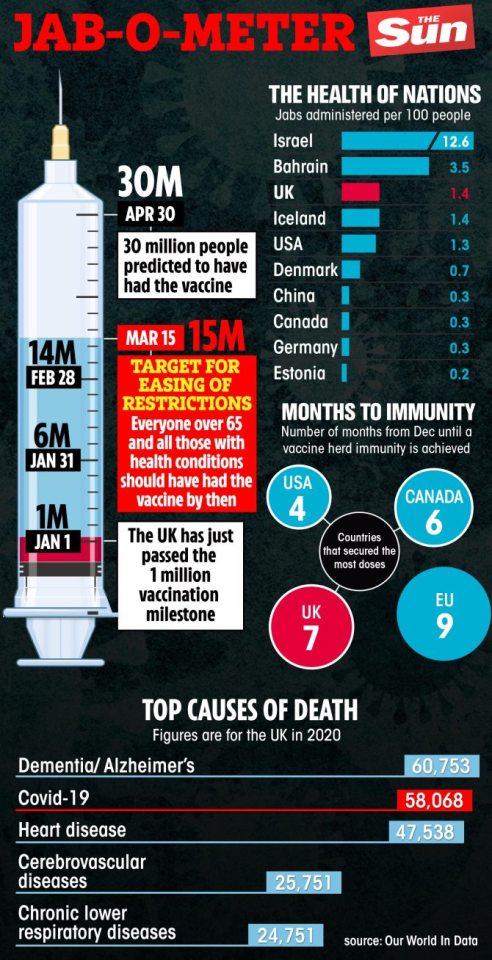 The calculator is only a model to give a broad idea of how long you may need to wait for your jab.

But the creators say they believe it is realistic that one million people will be vaccinated per week in the next year.

The Government have explained everyone must wait until they are contacted by the NHS, offering them an appointment.

Sir Ian McKellen, 81, gives a thumbs up after having his Covid jab at the Queen Mary University Hospital in London[/caption]

The NHS vaccine roll-out has begun, but there is a priority list. Pictured: Entertainer Lionel Blair, 92, receives the Pfizer/BioNtech jab at the horse racing course at Epsom, Surrey on December 16[/caption]

Vaccines are the only way to put an end to crippling lockdowns, and so the faster they can be given, the quicker lives can return to normal.

The new coronavirus variant, which can spread faster and is fuelling record high coronavirus cases over the UK, is adding pressure onto the race to doll out vaccine doses.

But officials have been causing confusion over what is blocking a fast roll-out, blaming manufacturing and quality control processes.

Professor Stephen Powis, national medical director of NHS England, told BBC Breakfast: “We’ve already delivered over a million vaccines of the Pfizer jab; now we’ve got the AstraZeneca one, so we aim to get it into people’s arms as quickly as it is supplied to us.

“As the Prime Minister said, we’re aiming for tens of millions of doses by the time we get to April.”

Prof Powis said last week: “We need the supplies to come through from manufacturers.”

Meanwhile, the Health Secretary Mr Hancock said this morning the NHS has the capacity to deliver two million doses a week of the vaccine once it receives supplies from the manufacturers.

Mr Hancock told BBC Breakfast: “If the NHS needs to go faster, then it will go faster. If there were two million doses a week being delivered, then the NHS would deliver at that speed.

“That’s the critical question, but that supply isn’t there yet, and we are working very closely with the manufacturers.”

But the PM Boris Johnson said that the limiting factor in expanding the UK’s vaccine rollout came down to waiting for batches to be approved.

He added: “We have the capacity, the issue is to do with supply of the vaccine.

“It’s not so much a manufacturing issue although that’s part of it.

'LOSE EVERYBODY IN ONE NIGHT'


Tragic pics of sisters gunned down by 'domestic abuser' dad

“Each batch needs to be properly approved and quality controlled.”

Government sources say each batch  needs to pass a 20-day sterility test and randomised quality checks before it can be used, requiring a staggered delivery, The Telegraph reported.

Three million Oxford doses are in vials awaiting safety checks, while another 15 million more waiting for “fill and finish” – the process of packaging the doses. This should take a matter of days.

Experts have questioned whether or not the staff levels in place will be sufficient enough to ramp up vaccinations, amid calls for the Government to cut red tape so that retired doctors and nurses can swiftly become vaccine volunteers.

There are currently 21 hurdles to be cleared before ex-medical experts are allowed to administer the life-saving jabs.

It means retired doctors desperate to help out with the mammoth NHS operation are falling at the first hurdle – paperwork.

On top of this, the health service needs to train thousands of volunteers who have signed up to help.

The Royal College of GPs has told The Telegraph that a larger work force would be needed to scale up to hit the two million doses a week target.

NHS England said it had an army of thousands of medics and support volunteers who had been recruited, and begun training. But did not say how many.

Thousands of Sun readers have already stepped forward to join our Jabs Army.