ONE of the men arrested in connection with the gruesome death an air stewardess on New Year’s Eve has claimed she initiated a kiss between them captured on CCTV in her final moments.

Chilling CCTV footage of Christine Dacera’s hours before she was found dead shows her kissing Valentine Rosales as she partied with a group of men.

Christine, 23, is seen moments before she was allegedly gang-raped and killed[/caption]

Ms Dacera was found dead in a hotel bathtubthe next day and “sperm and lacerations” were found on her body, leading officials to believe she may have been raped.

Christine’s body was also covered in scratches and bruises.

Police later arrested the 11 men suspected of playing a part in her death and investigation is ongoing.

Valentine Rosales, one of the men at the party, told Filipino outlet GMA: “[S]he was the one who initiated the kiss with me.

“I was trying to open the door. I rang the doorbell. She was the one who grabbed me.

“I rang the doorbell but I dodged, I sidestepped her.”

Newly released CCTV shows the 23-year-old going to her room with at least three men.

In the pictures, she is seen not wearing any shoes and holding a glass of wine after partying in the City Garden Hotel.

GMA reports a longer version of the footage has also been circulating on social media which shows Mr Rosales backing away from the kiss.

It comes after another man accused of being involved in the crime claimed the gang of 11 were all gay.

One of the men arrested, Gregorio de Guzma has told ABS-CBN News that he is gay and had no involvement in the alleged rape and killing of Christine.

He said: “For me, I’ve never had sexual relations with a woman. I’ve never been aroused by a woman. Always a man. Many can testify to that.”

Speaking of the men who partied with the air steward, he added: “Every one of them was gay.”

Christine was pronounced dead on arrival at a local hospital[/caption] 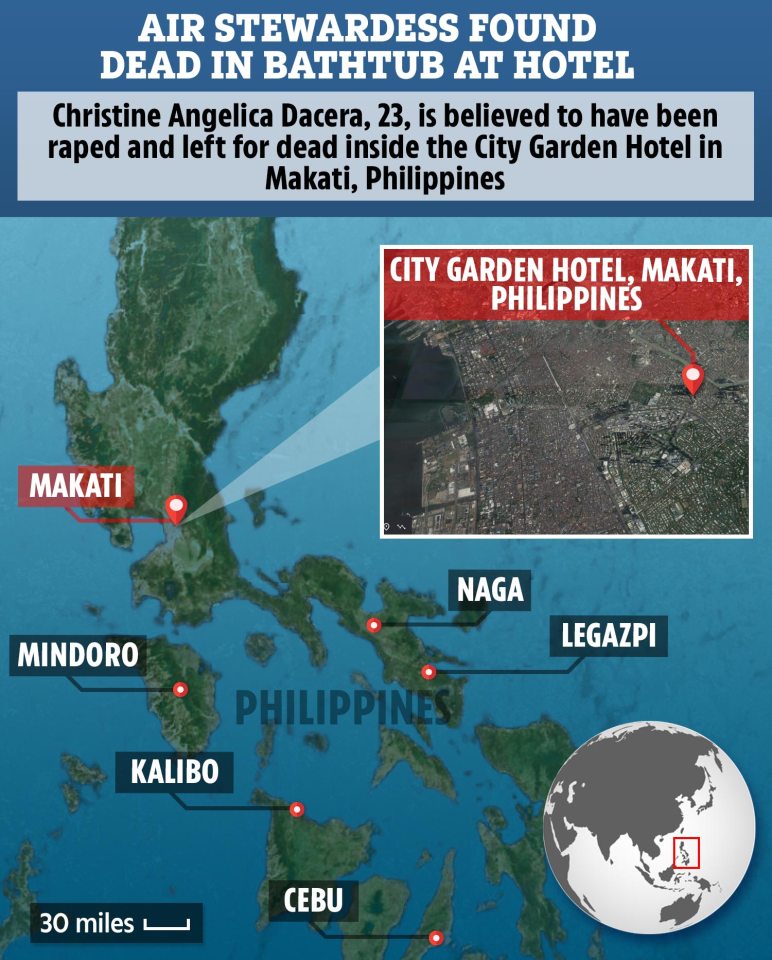 Police chief Harold Depositar said that most of the men were “practically strangers” to the victim.

He told The Philippine Daily Inquirer: “Only three of them were Dacera’s friends.”

An autopsy showed Ms Dacera’s death was caused by a ruptured aortic aneurysm.

Mr Depositar went onto say the aneurysm may have been caused by strenuous activity and a high level of alcohol in her blood.

He said: “For sure, there was force inflicted on her body because we found contusions in her leg and knees, and there’s an abrasion in her thigh,” and that semen had been found “in multiple places in the hotel rooms”.

Christine’s family are pushing for a second autopsy after claiming the first one was incomplete, ABS-CBN reports.


Trump discussed 'pardoning himself' as Congress pushes for ouster or impeachment

The family’s lawyer, Brick Reyes reportedly said they believed the young victim was drugged and abused before her death.

The family said the 23-year-old “had already experienced intoxication and complained that her drinks appeared to have been spiked”.

Rommel Galido, who was also parting with the 23-year-old that night,  told the Philippine Star she said to him during the party: “Someone put something in my drink.”

The flight attendant’s family has demanded a second autopsy[/caption]