TRAGIC Mick Norcross smiles next to his son Kirk in a heartbreaking final picture taken just three weeks ago.

The Sugar Hut owner and Towie star, 57, was discovered dead at his home in Bulphan, Essex, at 3.15pm yesterday.

Mick was found dead at his Essex home yesterday[/caption]

Mick had posted a cryptic message on Twitter hours earlier, which read: “At the end remind yourself that you did the best you could. And that is good enough.”

Essex Police last night confirmed the devastating news and said his death is not being treated as suspicious.

Just four weeks ago, Mick posed up for a beaming final selfie with son Kirk, who also found fame on the reality show.

Kirk posted the touching snap on Facebook the caption: “Me and the big man” alongside a heart emoji.

Twitter is awash with tributes from devastated friends and fans soon after news of the Sugar Hut owner’s tragic death started to spread.

Gemma Collins said she was “absolutely shocked and saddened” by the news.

Sharing a photo of her and Mick, who she briefly dated, she wrote: “always a gentleman”.

Mark Wright said Mick’s death was “such sad news” as he posted a touching tribute.

The ex-Towie star said: “You were a great man, an inspiration to many, always so polite and welcoming. Such a gent.

“We lost a good one.

“Let this be ANOTHER reason to check in on people and ask if they are ok. It’s imperative we talk.

“Love to Kirk and the rest of the family.” 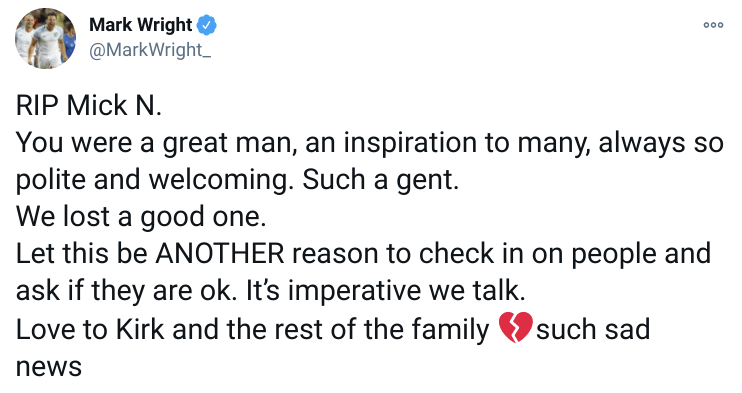 “My thoughts are with his family.”

Sharing a photo on Instagram, Mick’s former co-star Mario Falcone said the news was “very hard to accept,” adding “I had so much respect and admiration for this man.”

Referring to his own battle with depression, he said: “You were the only one from the whole show that reached out and cared about me.

“You were someone I looked up to and held in the highest regard. The thought of you going through the same pain and emotional darkness I did breaks my heart. You will be sorely missed by so many!”

Friend Jess Wright expressed her sadness at the shock news, writing: “Terribly terribly sad. Always such a gentleman and so kind.

“Devastated for him and his family. Sending love to them at this time.”

The 57-year-old’s body was found at his home in Bulphan, Essex[/caption]

Friend Russell Quirk added: “Sad to learn of the death of @micky_norcross – a true #Essex legend gone too soon.”

And pal Mark Hassell wrote: “I truly can’t believe this. Its so sad. He was such an amazing man.

“Truly down to earth, welcoming & graceful. He always treated me so well.”

Mick joined the cast of Towie in the early series alongside his son Kirk, 32, Mark Wright and Lucy Mecklenburgh.

The popular TV celebrity caught the eye of Gemma Collins and the pair went out on dates during the early episodes.

But in 2013 he revealed he was leaving the show over fears it was damaging the image of his nightclub.

He told The Sun at the time: “My club is an upmarket venue where people come to drink champagne and feel spoiled.

“All these rows they keep filming don’t show the club in a good light and I’m worried it’s putting people off coming, which is the last thing I want.

Mick became a grandad following the birth of his son Kirk’s child.

He became a property developer after quitting the show and was given the green light to build a dream rural manor house in leafy Essex in 2018.

Most read in Showbiz

DUGGAR IN THE DUMPS

An Essex Police spokesman said: “We were called to an address in Brentwood Road, Bulphan shortly before 3.15pm on Thursday 21 January.

“Sadly, a man inside was pronounced dead.

“His death is not being treated as suspicious and a file will be prepared for the coroner.”

Mick Norcross and Pamela Anderson at Sugar Hut in 2012[/caption]

Cally Jane Beech, Mick Norcross and Hannah Elizabeth during a night out in Essex in 2015[/caption]

Mick with his son Kirk, who also appeared on Towie[/caption]