CORONAVIRUS cases are plunging across London with infections in parts of the capital falling by up to half in just one week, figures reveal today.

Data released this morning shows cases have dropped by 50.1 per cent in one of the most deprived boroughs – Tower Hamlets in East London – in the week to January 29.

Coronavirus cases in parts of the capital are dropping[/caption]

Cases had dropped by 746 meaning the current figure for the borough is 742.

Camden saw its cases drop by 43 per cent, while others including Redbridge (42.6 per cent), Croydon (41.9 per cent) and Barnet (41.5 per cent) all experienced dramatic reductions.

However, wealthy boroughs did not see cases drop as much as some of the less affluent areas, reports the Evening Standard.

In Hammersmith and Fulham, cases were down 21.8 per cent, Kingston 21 per cent and Richmond 20.5 per cent – but Covid levels in these boroughs did not rise as high as other parts.

The rate is still above 400 in four boroughs – Ealing, Hounslow, Brent and Hillingdon.

Thirteen boroughs are above 13, while 14 parts of the capital are above 200.

More than 3,000 Covid patients were admitted to hospitals across the capital in the week to January 31.

And 148 Covid-related deaths were announced in London yesterday – bringing the total death figure in the capital to 13,759.

Last week estimates suggested that the R rate may have dropped to 0.6 in London.

The R rate – which represents the number of people an infected person will pass Covid onto – was said to be between 0.7 and 1.1, Sage said last week.

In the capital, however, the R rate may even be as low as 0.6, while in the South East and East it could be down to 0.7.

It comes as ten million Brits were vaccinated against Covid – as the UK officially passed the peak of the second wave.

Health Secretary Matt Hancock yesterday hailed the “hugely significant milestone”, saying: “Every jab makes us all a bit safer. I want to thank everyone playing their part.”

One in five adults have now had their first dose of a Covid vaccine.

And it comes as Chief Medical Officer Chris Whitty said the UK had passed the peak of the second wave for cases, hospital admissions and deaths.

Most read in UK News


Harry 'can't be half in, half out' of Royal fold if he's to keep military titles


SAS trooper fights for life after crash with US soldier during 18,000ft sky dive


Body found in hunt for missing carer, 19, as brother says 'I loved her to bits'

Last night PM Boris Johnson led the nation in clapping for the NHS and fundraising legend Captain Tom Moore, who died of the virus aged 100 on Tuesday.

He quoted Captain Tom’s “Tomorrow will be a good day” catchphrase.

The NHS is now well on course to vaccinate 15million of the highest-risk Brits by mid-February. 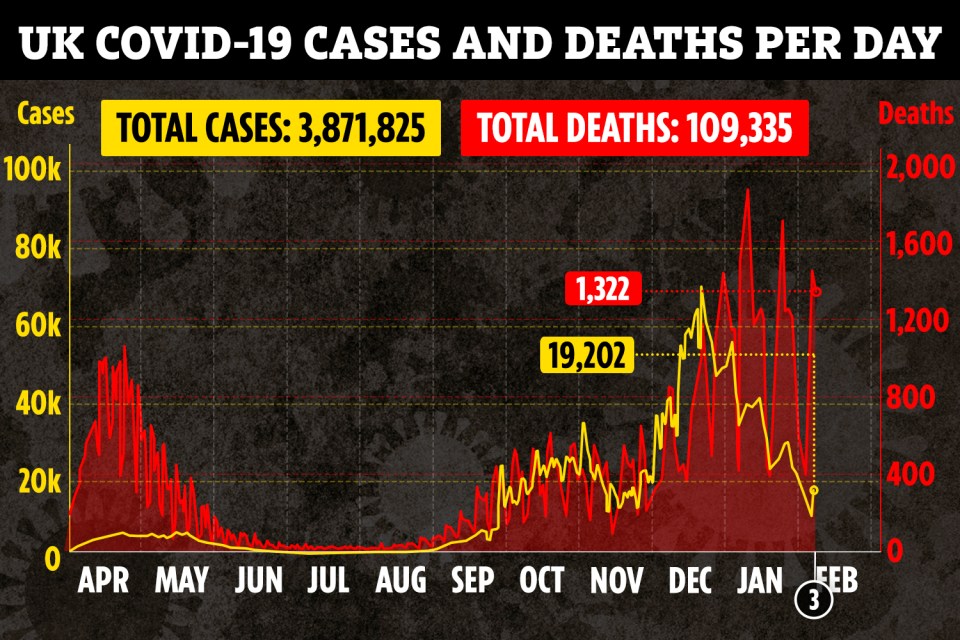 ALMOST two million people have not worked for at...
Read more